Week 2 of camp for the geophysics students was at the new University of Oklahoma Bartell Field Camp. Students were split into three groups and each group rotated through three main geophysical methods: gravity, magnetics, and ground penetrating radar (GPR).  I was responsible for the GPR all week, but we'll briefly discuss everything they did and some problems we had along the way. 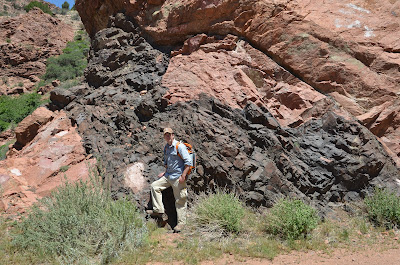 Monday the students went on an intro field trip to learn about the geology of the area.  First students walked up the road to 'high camp' noting the sediment basement contact (and what we interpret as a large fault breccia) on the way.  When into the granitic basement there are many mafic dikes, some locations even have dikes crosscut by later intrusions.  The students this year really seemed well prepared to tie the geology into their reports and were very careful in noting/interpreting features.  Next we drove to Tunnel Drive, a short hike that exposes lots of basement deformation and some classic fault examples.  There were also a couple fun stops like Skyline Drive where dinosaur footprints have been preserved as trace fossils.  In the picture below we are looking up at the bottom on an impression likely left by a foot of an ankylosaurus. 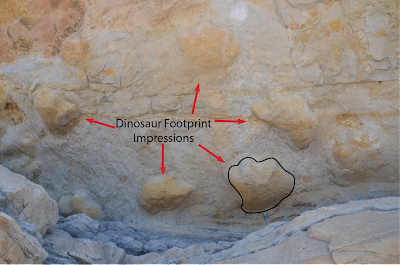 The next three days the groups rotated through the geophysical methods.  In this post I'm only going to discuss the GPR collection and data.  The gravity data is currently being processed (so expect a post about it early next week) and the magnetics are posing problems.  Our main magnetometer has an internal problem that prevents us from downloading the data collected.  It is being sent back to the factory and the students will collect new data with an older system next week.  There is also a special magnetic surprise I found in an outcrop that I want to discuss in a more detailed post.

Ground penetrating radar is a technique we haven't really used much recently at OU, but I'm hoping to make a come back with it! The system needed lots of tweaking, adjusting parameters, and fiddling with; after that it obtained some really interesting data.  A ground penetrating radar sends a signal into the rock, which is reflected from various objects/interfaces, so data is interpreted similar to seismic data (only at a different time scale).  Seismic waves travel through rock at around 2200km/second while radar waves are much faster at about 0.1m/nanosecond.  GPR is used extensively in archeology to look for near surface targets and to find bodies during criminal investigations (we have in fact used this system over a mass grave before in Norman... but that's another post all together).

The first day we had students experiment with different parameters over a known target (a metal culvert under a road).  While the target isn't necessarily geologic, we know what it is, where it is, and how big it is.  Using this we setup an ideal parameter set to then examine more interesting geologic features.  Other groups during the week also targeted the culvert for practice, then picked more interesting areas to examine.

First I had to patch together some codes to convert the GPR data from the proprietary DT1 format to a more standard SEGY format.  We then worked up some seismic unix command flows to process that data.  The images shown are not migrated and could benefit from migration, spiking deconvolution, etc.

The first image shown is on the high camp road.  There was a culvert near the surface, but below that are other diffractions from some interesting geological structures.  I'll currently not say any more so students can think about what these are.  The second image shows why this tool could be so valuable.  There was little geology at the surface, but according to the data there is a dipping reflector just under our feet.  What could it be? Maybe with a few more trips up there I'll be able to find it in outcrop somewhere.  There were also some diffractions deeper in this image.  While I do have lots of comments about the GPR parameters, setup, etc I don't think it's so important to discuss.  My goal is to show that there is so much beauty in the complexity of what happened here.  The basement rock is very very old (without an extensive literature search we'll say pre-cambrian, which is ~540 Million years ago). 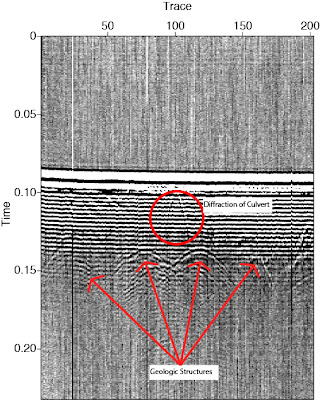 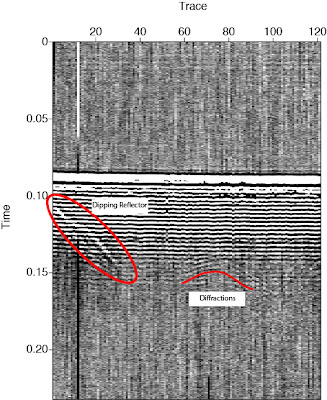 Friday we took the students on another field trip.  Early in the morning I had to take our other TA, Cullen Hogan, to the airport.  He is leaving us for an internship and will be greatly missed in the last week of the course.  After returning from the Colorado Springs airport the students piled in to drive to one of my favorite views in southern Colorado, Spiral Drive in Salida.  On the way to Salida from Cañon City small sedimentary 'hanging basins' can be found in the mountain sides as we drive through a thrust zone between sediment and basement.  Salida lies in the San Lúis Valley, part of the slow Rio Grande Rift.  The view is always amazing and some complex geology is observed on the way.  Below is a panorama overlooking the collegate peaks I took at this location last year (there wasn't as much snow this time).