My last post was on the idea, brainstorming, and basic setup of a ultrasonic mapper intended for cave passages.  This post is an update on the prototype that is running now and will hopefully be tested relatively soon when a bit more hardware mounting has been done. 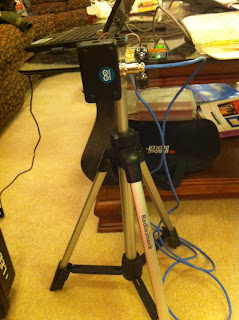 Attached are several photos of the current state of the system, a simple plexiglass mount was constructed to attach the servo and sounder to an old tripod.  This mount will be stronger on a final version and detachable from the tripod.  This is just a proof of concept prototype.

Since servos only rotate 180 degrees the final model will use two sounders opposed to each other to collect a full 360 degree profile.  This means a similar connector (5-pin mic style) will be used with two units mounted in one case, or it may be possible to go with a more sophisticated sounder.  Keep in mind that the point of the whole project is to construct the profiler on a student shoestring budget.

Below is an 'image' collected.  The vertical line on the right side is the back of an office chair and the feature on the left is the back and seat of a couch.  This was scanned rather slowly over about 40 seconds with many pings averaged out to reduce error. 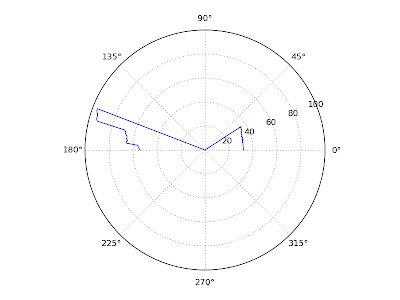 Since I collected these images I have implemented an intelligent algorithm that makes a quick three ping assessment and based upon the results it will move to the next position or ping up to an additional fifty times to reduce the uncertainty.

The next step will be to make an intelligent scanning rate method that will scan with lower resolution over smooth surfaces and slow down over surface features.  Hopefully the whole scan can be a 15-30 second ordeal allowing quick mapping of passages.