Physics of a Beer Head- It's All About Tension Gradients

Who doesn't like a good beer? Geologists/geophysicists are always appreciate a nice cold glass of their favorite beverage poured by a skilled bartender that produces a nice frothy head that persists for the entire experience.  The question is why does the head not disappear quickly like soap bubbles?  Douglas Durian and Srinivasa Raghavan wrote up a 'quick study' in the May 2010 issue of Physics Today.  This article is based on that article with some additional information.  Durian and Raghavan also discuss soap bubbles and present high magnification photos of foam structures, but those will be ignored here as their method of persistence is quite different than that of beer foam.

Remember from high school biology that proteins have hydrophilic and hydrophobic parts to them.  This means that one part of the protein 'likes' water and will immerse itself, but the other end does not like water and tries to stay away from it.  When we look at a foam magnified there are small fluid sections in-between the air bubbles.  Proteins orient themselves in the bubble walls.  Say that a bubble begins to stretch thin and is in danger of bursting.  The stretching of the wall means there are fewer proteins in the middle where the wall is thin and more on the edges.  Proteins can change the surface tension and this gradient is surface tension causes liquid to flow to the thin section, restoring the stability of the bubble.  This effect is known as the Gibbs-Marangoni effect, and is in fact a strong example of the phenomena. 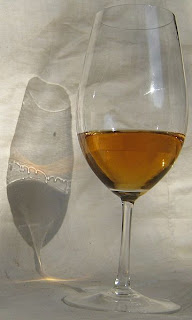 This Gibbs-Marangoni effect was in fact first observed in glasses of wine (pictured) and discussed by Lord Kelvin's brother James back in the mid 1800's.  Carlo Marangoni studied the idea for this dissertation and the solutions of the problem were formalized by Williard Gibbs.  (Yep, that the same guy that independently developed vector analysis, Gibbs free energy, etc)

So is there anything other than pH that can change the persistence of head? Absolutely! Due to gravity the fluid drains to the bottom over time which destabilizes the foam.  There isn't much to do about that, but we can combat Ostwald ripening.  Basically this mean that gas diffuses from smaller bubbles to larger ones.  Laplace described this knowing that the large bubbles have a smaller curvature and therefore lower pressure than small bubbles.  According to the article brewers can add about 20ppm of nitrogen to the beer to slow this process.

The items discussed in this article apply across many scientific items.  There is an everyday example that scientists would call Benard-Marangoni convection, but you probably call it boiling water.

Once again these pictures are from the interweb and not my property.

By now all are well aware of the well blowout in the gulf at the 'Deepwater Horizon' site.  Thus far several attempts have been made to curb the flow of crude into the gulf, but none have worked.  One of the first attempts was to use a dome structure to cover the rupture and direct the oil to a waiting barge.  This dome quickly filled with gas hydrate and was made much more buoyant by the hydrate (density of hydrate is less than that of water, especially sea water).  Attached is a picture of the 4-story dome courtesy telegraph.co.uk.  I feel it is important to point out a few things about hydrate the media has either left out or stated incorrectly.

First, what is gas hydrate? The most common buzz word I've seen is 'crystalline gas' or 'solid gas'.  These are contradictions.  We know there are three basic states of matter: solids, liquids, and gasses. (There are also plasmas, Bose-Einstein condensates, string-net liquids, and so on.) You can see that a 'solid gas' is simply incorrect! Gas hydrates are cages of water molecules with a guest molecule of gas trapped inside.  There are different types of cages for different sizes of guest molecules.  Though the material can look like ice it is fundamentally different.

Under the ocean there is quite a lot of methane hydrate.  We have known about hydrate for some time and it's important for past climate change, possible energy production, and as a potential hazard for sea slopes and drilling operations.  Dr. Robert Bea of UC Berkeley has suggested that Halliburton cementing the well only 20 hours before the explosion on the rig is important.  When cement is hardening is releases heat. This heat of crystallization could have heated the hydrate up.  The hydrate weakened the concrete and as it was melting released its gas, causing a surge of pressure to the rig.

Hydrates have been a problem to the industry before, clogging pipelines and apparatus.  Hydrates only form under certain pressure and temperature conditions, so the areas can simply be kept out of P-T ranges where hydrate would be stable.  This is easier said than done, and sometimes inhibitors are injected.  Chemicals such as methanol decrease the stability of hydrate.

So what is the plan now? Currently an attempt to place a new, capped section of pipe on is underway.  The difficulty with any plugging operation is the pressure at which the fluid is shooting out.  If this fails a smaller dome has been built in hopes that it will remain warmer and hydrate will not be stable. There are also measures in place to inject hydrate inhibitors, though this could have unknown environmental impacts.  Currently oil continues to gush out at about 210, 000 gallons/day.  Below is an image from NOAA (May 11) showing the spread of oil then some links to follow.  Numerical modeling of the spread has done surprisingly well as has put rapid mathematical modeling in the spotlight also.

Afterthought:
I received a question about why the flow rate estimates were so widely varied.  In the video of the flow you can see both oil and gas phases coming out of the pipe. If it were just one phase, knowing the scale and frame rate of the pipe would be sufficient to get an accurate estimate. It could be that as oil is releasing pressure more hydrate is dissociating and causing the bursts of mixed gas making the flow hard to figure.