Just as Earth was about to have a close encounter with asteroid 2012 DA14, the people of Chelyabinsk, Russia had a personal experience.  Before we talk about both 2012 DA14 and the Chelyabinsk event some terminology needs to be set out.  A meteoroid is a small chunk of debris in space, generally anything from a fleck of dust to a small boulder.  A larger space bit of debris is termed an asteroid.  A meteor is when some of this debris enters our atmosphere, heating up due to friction.  A meteor is called a meteorite if it actually reaches the surface of the Earth and survives impact.  Everyday we are pelted with many tiny meteors, but few reach the surface.  Most meteorites are never discovered as they are statistically much more likely to land in the ocean due to it's coverage of Earth's surface.  Sometimes meteorites are found on land, in fact it is common for scientists to go to Antarctica to look for the dark rocks on the surface of a white sheet of ice.  There are many pages on hunting meteorites  and a book as well, it's worth reading about if your curious how we find rocks that landed a long time ago.

It's worth saying that there are different kinds of space debris, some more stony, some made of almost solid metal, and some of ice.  While it's worth discussing, I'd rather focus on the current events in this post, so if you are curious there is a nice page at geology.com that gives the basics.

To begin, lets talk about 2012 DA14, or the non-intuitive name that we gave a near Earth asteroid that is about 160 feet in diameter and weighs a massive 190,000 metric tons.  This asteroid could do some serious damage and was scheduled to have a close call with Earth on February 15th.  How close? Well, it would be about 17,200 miles from the surface, which seems like a long way.  It's not.  The moon is 250,000 miles away (roughly) and we've been there and back in a matter of a few days.  In fact, the geosynchronous satellites that beam TV and weather data down to Earth orbit about 22,236 miles above the surface to rotate at the same rate the Earth does.  As shown in the figure below, 2012 DA14 passed between us and the geostationary satellite band; a very close call. 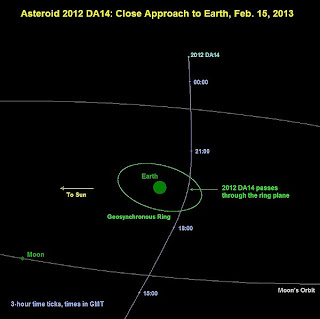 Why talk about 2012 DA14 in a post about a meteor over Russia? To say they are not related in any way.  They approached from entirely different directions and it just happened to be a coincidence of space and time.

Now for the event in Russia.  At 3:20:26 UTC on Feburary 15th a large meteor about the size of a schoolbus entered the atmosphere.  The 49-55 foot estimated diameter object probably weighed about 7000-10000 tons.  While heating up upon atmospheric entry the meteor "detonated" or exploded in mid-air.  This has happened before, a list of historic airbursts can be found here.  The most famous being a large explosion (also over Russia) in 1908 called the Tunguska event.  That explosion released the energy of 10-15 million tons of TNT, leveling forests and destroying an area of about 830 square miles.  The event that just occurred was about 500 kilotons of TNT equivalent, or roughly 20 times smaller.  Shock waves from the event still managed to send around 1500 people to local hospitals with shards of glass and building materials in their faces/skin from rushing to a window too see what was happening.  Videos of the entry are all over the web, in several you can hear the detonation and shock wave.

So how do we know so much about this object considering we didn't know anything about it until it exploded overhead? Well, remote sensing helps us.  When a meteor entered over Wisconsin in 2010, I wrote about following the trail on the US Doppler Radar Network (here).  This time we could see the meteor from weather satellites (Meteosat 10 image below) as well as on seismic and infrasound stations.  Another meteosat also captured several frames that have been made into a video here.  Current estimates of the entry speed are in the area of 40,000 mph with a very shallow entry angle. 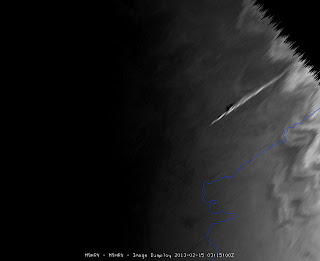 First the seismic observations.  So far I've seen reports of the Borovoye, Kazakhstan station seeing a gorgeous signal (thanks to Luke Zoet on this one). The station details, and even a photo are available at the USGS network operations page.  Below is a filtered (0.15 Hz low-pass) seismogram from BRVK.  This would be a result of the shock wave rattling the ground and seismic station.

Next, and rather interesting, are the infrasound observations.  Infrasound is very low frequency sound (below 20Hz) that we can't hear, but can record as air pressure variations.  It so happens that Steve Piltz of the Tulsa National Weather Service has a microbarograph.  Upon seeing his data from an earlier earthquake (yes, ground movement causes air pressure waves), I immediately bought a unit from Infiltec and set it up in the office at Penn State.  Below is a picture of the station. 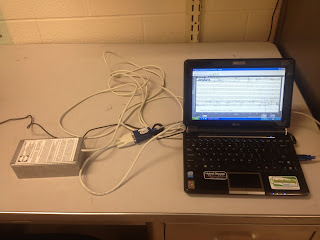 Infrasound propagation is incredibly complex and difficult to predict over such long distances, so I've done a simple calculation that is very likely going to be revised upon some discussions with seismologists this week.  First, I wanted to know how long the sound would have to travel.  To find the shortest travel distance between a latitude and longitude set you can assume a spherical Earth (not too bad for such a back of the envelope calculation) and some math.  Remember trigonometry? Well when it's modified to work on a sphere instead of in a plane it's creatively called 'spherical trigonometry' and consists of a strange function called the haversin.  If you are curious about how I calculated the travel path of the sound waves checkout the wikipedia page on the Haversine formula, but I've included the formula below.  Below is the result of the calculation, a great circle path between Chelyabinsk and State College, PA. 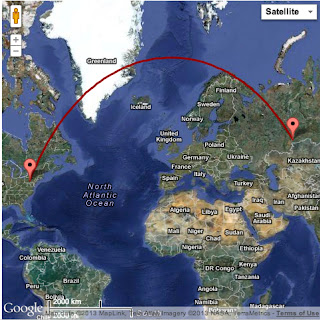 The distance the wave would travel would be something like 8670 kilometers.  Sound travels at 340.29 m/s at sea level, but since we're making assumptions we'll say 300 m/s is a nice number.  So the wave would take somewhere in the 7-8 hour range to reach State College (assuming it's non-dispersive and many other likely not so great assumptions).  Luckily for us, the event and the arrivals are overnight.  During the day my infrasound station is swamped by signals from office doors opening and closing amongst other things.  The meteor entered the atmosphere at 10:20 pm local time, so I've plotted the infrasound from 10 minutes before the meteor entered to well after the energy should arrive.  There is a large increase in the noise shortly after entry, but this is too soon.  Could it be seismic energy or arrival of a faster shock path? Maybe, that's a point for some discussion and revision later.  The big thing to notice is the noise increase at about 7-8 hours after the entry.  It's still early in the morning, so it is doubtful that this is people coming into work.

I've made a .SAC (seismic analysis code) file of the raw data for about 24 hours around the event available to download here.  Download the file (~19Mb) and play with it! The data is collected at 50Hz, but all that is in the meta-data (as well as location details).  I use ObsPy to do most of my analysis in Python, but you could use SAC or other codes meant for seismic event analysis. 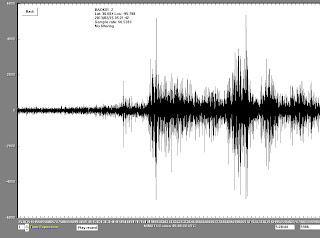 Infrasound is actually what allows us to determine the energy release from the explosion.  As it turns out seismic stations and infrasound have been used to monitor nuclear testing for years (a relevant topic currently considering the recent tests by North Korea).

Overall, I'd say stay tuned for any updates.  Eventually the infrasound station I have will be setup for live streaming.  I'm sure after discussion with some folks more versed in infrasound travel we can clean up the data and maybe do some more back of the envelope energy/rate calculations for demonstation purposes.