After the small rash of tape theft resulting from my suggestion at a talk that the audience go home and unroll scotch tape to see the resulting electrical dischange (which deserves a blog post soon) it's time for another attempt to make Swingline Co. stock soar.

In a recent Physics Today article "Geometric Cohesion in Granular Materials", Scott Franklin of the Rochester Institute of Technology showed some very interesting data regarding how the shape of a material effects how likely it is to stay together as a coherent mass.  Before we delve into the article though, let's talk about cohesion in general.  Then we can come up with a couple of fun experiments that you can do at home.

Cohesion is just the tendency of a material to stick together.  This is different than adhesion though.  Consider a water drop on a dish in your dish drainer.  The water drop is sticking to another material (the ceramic) which is adhesion.  The water drop is also a coherent mass; water molecules are sticking together to form a raised droplet on the surface of the plate.  In essence the water is 'sticking to itself', which is due to electrostatic forces of water being a polar molecule.  Electrostatic forces give water a property of surface tension that causes lots of wonderful things that can make up a whole other post at some point. 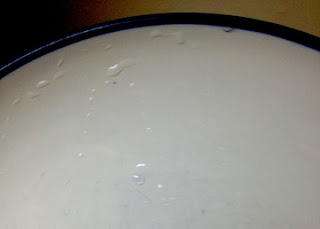 Other things can cause a material to stick to itself though.  Remember playing the old pickup sticks game as a kid? The object was to extract a stick from a pile of sticks on the table without disturbing other sticks.  This turns out to be pretty challenging.  Your pile of sticks appeared to be stuck together or interconnected, which is cohesion in a macroscopic or broad sense.  In the case of the sticks electrostatic forces certainly aren't the cause.  Electrostatics forces are relatively weak, and the sticks don't have enough mass for their gravitational attraction to cause this cohesiveness of the pile.  What is the mysterious factor then? It's just their shape. When objects act cohesive because of their geometry or shape it's called geometric cohesion.

First grab a couple of tablespoons of sugar, place it in a small container (an old medicine bottle works great) and turn the container upside down on the table.  Now remove the container... the sugar spreads out in a small pile.  The roughly spherical grains of the sugar don't stick together that well and the pile isn't very tall.  The angle of the pile from horizontal is called the angle of repose, and is around 30-35 degrees for lots of things.  My pile of sugar sat at about 30 degrees.  The angle of repose really tells us how hard it is for the grains to slide past one another.  If it's easy, the pile is a very low angle, and if the pile is made of large, angular hunks of rock, it becomes more steep. 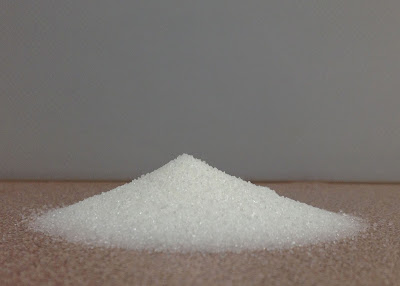 The angle of repose can even be thought of as a proxy for the coefficient of static friction, or how hard it is for the grains to move past each other from a dead stop.  A mathematical relationship can be derived from some geometry, but it turns out the tangent of the angle is about the coefficient of friction. So the tangent of 30 degrees is about 0.6, which is the general number for static friction of lots of materials.  This result means all is well in the world of static newtonian physics and we can think about something more interesting than approximate spheres of sugar.

What about rods? Going back to our game of pickup sticks, the shape of the long, narrow rods seems to be the main factor holding things together.  It's easy for lots of objects to interact and become 'locked together'.  Who cares about rods locking together? Manufacturers often have automated assembly machinery that may have large hoppers of screws, and when things get locked together it costs money.  The long narrow shape of screws can jam hoppers in seconds and hold up the entire line.  While not many people have a pile of tiny screws at home, I bet you have staples.

Staples are a funny shape really.  Standard office staples are about 7mm along the long upper shank and  around 5mm at the two barbs.  These measurements give the staple a barb to shank ratio of about 0.7, which as it turns out, is a governing number describing how well staples can stick together.  Franklin's group did a whole series of experiments with staples of different barb ratios and found that staples with a ratio near 0.4 were the most cohesive.  Even though our staples aren't the ideal ratio let's repeat the sugar experiment. 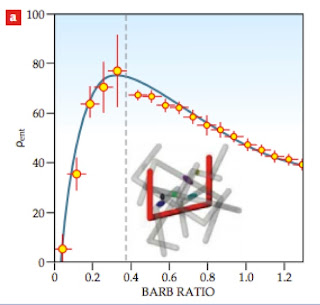 Using a stapler, eject a bunch of staples into the same container (or one with a slightly larger mouth if you have it).  Now shake the container up for a bit, turn it upside down, and remove the container.  This time the mass didn't spread like the sugar, but retained the relatively sharp edges of the container shape.  Retention of shape tells us that the staples are cohesive, and their high angle of repose means that the coefficient of static friction is very very high.  Franklin's group is currently seeing how strong these piles are by pulling on the ends, but they are actually pretty robust. 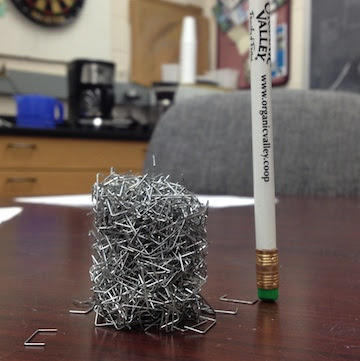 The big question is why does any of this matter other than being interesting? Well, cohesion is a big deal when we study soils.  Cohesion can determine if the ground can support a building, if a landslide is due, or if the machine powder coating your morning doughnuts gives you a plain doughnut.  While some of these are more life threatening that others, it's import to study cohesion to keep tabs of impending disasters, especially avalanches and landslides. I know that there aren't that many staples in soils generally, but there are clays which are shaped like plates.  Different minerals/materials in the soil with different shapes can greatly change the strength of the soil and how likely it is to slide as a mass.